(Update: there is a PDF version of this series of blog posts now available: Performance Comparison from Delphi 2010 to XE6)

With the release of Delphi XE6 and Embarcadero’s emphasis on Quality, Performance, and Stability (QPS), I wanted to see for myself the level of improvement, especially in performance.  Delphi XE6 is definitely faster and more responsive than the last few versions, especially in FMX, but I wanted to see if I could quantify the performance improvement.  There have been a couple recent articles and posts about XE6’s speed (see http://www.dewresearch.com/news/232-rad-studio-xe6-lo-and-behold-  and http://www.delphitools.info/2014/05/07/a-look-at-improved-inlining-in-delphi-xe6/).  This series of blog posts document my explorations into the performance differences between Delphi 2010, XE, XE2, XE3, X4, XE5, and XE6. Before starting, I made some predictions about what I would see when comparing Delphi 2010-XE6.

For the tests in these blog posts, I created sample applications and compiled them in Release configuration for each version of Delphi 2010 to XE6 (if applicable).  All compilation tests (including for OSX, iOS, and Android targets) were performed on my Windows 7 box, and, if possible, compiled from the command line to avoid Delphi IDE overhead (this was not possible with some of the mobile tests).  Windows testing was performed on this box (Microsoft Windows 7 64-bit, Intel I7 930 @ 2.8 GHz CPU, and 6 GB RAM) with all applications except Microsoft Excel (to record test results) closed.  iOS applications were tested on an iPod touch deployed directly to the device in debug mode.  Android app were tested on a Nexus 7 (2013) deployed directly to the device in release mode.  iOS applications by necessity were in Debug configuration in order to be able to compile and deploy them to my iOS device. Every test was performed a minimum of 3 times.  The best 3 times were averaged to produce a final value. 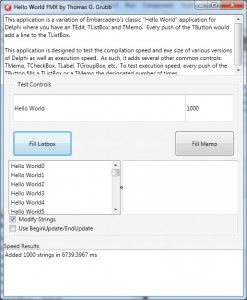 My first test was to create a slightly complex Hello World Delphi application for VCL, FMX, and Mobile (iOS and Android).  This application is a variant of the classic Delphi application of a TEdit, TListBox, and TButton.  Instead of one add of the TEdit constant every click of the button, each click would fill a TListBox or a TMemo with some number of repetitions.  The TListBox.Items.BeginUpdate/EndUpdate and TMemo.Lines.BeginUpdate/EndUpdate could be turned on or off.  In addition, a number could be optionally be appended to each TEdit string (to avoid any efficiencies with using the same string each addition).  The Hello World source code for VCL, FMX, and Mobile can be downloaded here.

Each week, I will add a new blog post detailing different performance tests.