With the release of Delphi XE6 and Embarcadero’s emphasis on Quality, Performance, and Stability (QPS), I wanted to see for myself the level of improvement, especially in performance.  Delphi XE6 is definitely faster and more responsive than the last few versions, especially in FMX, but I wanted to see if I could quantify the performance improvement. Before starting, I made some predictions about what I would see when comparing Delphi 2010-XE6.  Let’s see how I did:

Now for the awards ceremony… 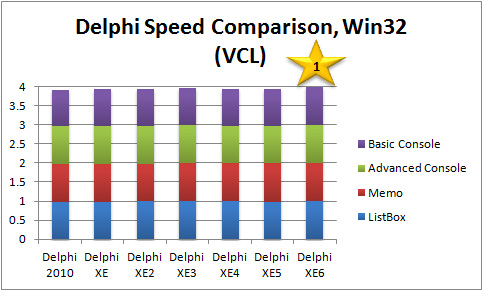 Surprisingly, Delphi XE6 wins the gold award in my performance tests for Win32 VCL.  The differences are extremely minor between all versions of Delphi so this coveted award could have gone to any of them 🙂  Delphi XE3 manages second place and a silver medal.  Delphi XE scores the third place bronze award. 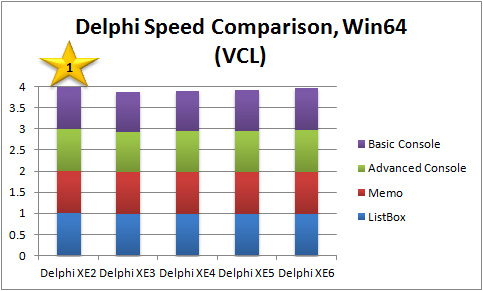 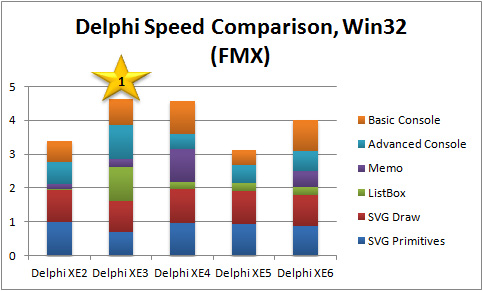 Moving to FMX, the performance differences get much larger.  Delphi XE3, despite its huge EXE sizes and poor Memo performance, produces the fastest FMX executables on Windows in these tests to win a gold medal.  Its ListBox performance is what really stands out.  Delphi XE4 makes a very strong second place showing for silver.  Bronze goes to Delphi XE6. 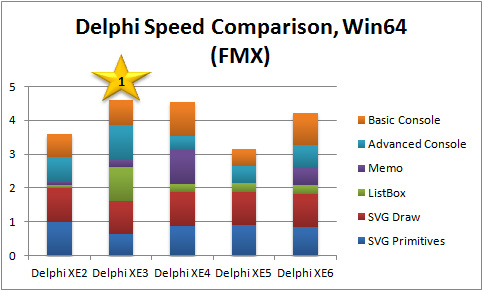 Going to 64-bit, Delphi XE3 again wins the gold with Delphi XE4 getting the silver.  Delphi XE6 comes again in third place, though its score improved noticeably over 32-bit. 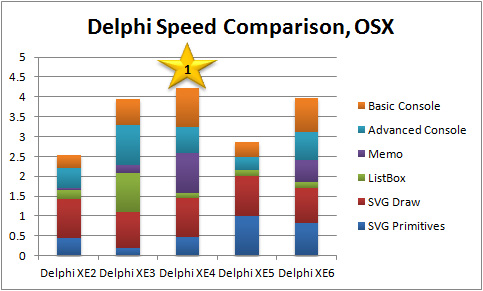 Switching to the Mac, Delphi XE4 wins its first gold medal.  Delphi XE6 sneaks past XE3 to win the silver. 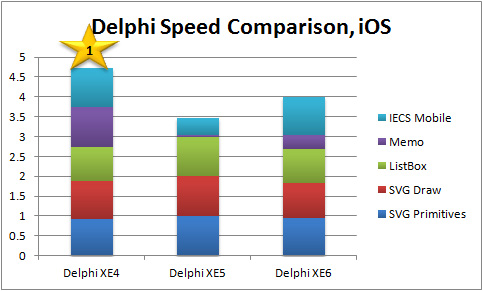 Shifting to mobile, we are down to Delphi XE4, XE5, and XE6.  Delphi XE4 wins another gold medal for the iOS platform on its solid memo performance.  Delphi XE6 gets second place for the silver and XE5 trails for the bronze. 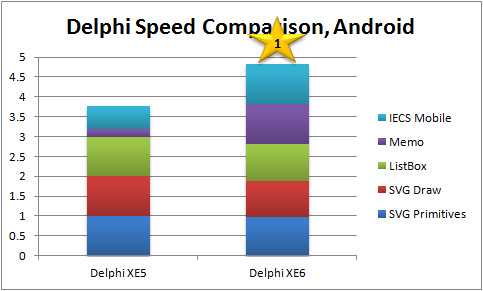 So what does this mean?  How did Delphi XE6 perform on its mantra of “Quality, Performance, and Stability?”  As far as this series of performance blog posts are concerned, Delphi XE6 did neither as well as I hoped nor as bad as I feared.  It only outright won a platform twice (and one of those was by a whisker on Win32 VCL).  However, Delphi XE6 was a solid performer and competitive for all platforms.  Compared to its immediate successor (Delphi XE5), it is a huge advance in performance and nearly brings it back up to the levels of Delphi XE3 and XE4, both of which performed surprisingly well in FMX.

If you do a medal count of the different platforms and give 3 points for Gold, 2 points for Silver, and 1 point for Bronze, Delphi XE6 racks up the most points.  Even if you ignore the Android platform, Delphi XE6 still did 1 point better than XE4.  If you then also ignored the iOS platform, Delphi XE6 would still tie with XE3 at 9 points.  Considering that it adds both iOS and Android platforms, seems to have fewer issues compared to Delphi XE3 and XE4, and vastly superior performance compared to Delphi XE5, I would say that Embarcadero achieved their goal. Almost a month and over 12,000 words later, I have finally finished this series of blog posts on the performance comparison from Delphi 2010 to Delphi XE6.  I hope you have enjoyed them.  It was a ton of work, but I think it was worth it.  Happy CodeSmithing!